US Election 2020 – what should you be looking out for on election day?

That might seem like he is relatively close to already winning, but this was the same for Hillary Clinton, and the Republicans won’t be starting from zero either. In a normal year, Republicans would expect to begin on at least 187 – although this might just be 138 on this occasion, as we will come onto.

This leaves 184 Electoral College votes up for grabs. Not all states here are as important as others, and campaigns will tend to focus their efforts on those ‘swing states’ that have the largest number of Electoral College votes: Florida, Pennsylvania, Michigan and North Carolina; worth 80 between them. With a candidate needing 270 to win, these states would typically carry a Democrat over the line, although a Republican would also need a number of the smaller swing states: Ohio, Arizona and Wisconsin; worth 39 between them. Typically, Ohio and Arizona favour the Republican party, Ohio having been ‘red’ in all but two elections this century and Arizona only voting Democratic once since 1952.

Arizona has not typically been a swing state for decades, but polling currently gives Joe Biden a lead in the state which suggests he could be the first Democrat since Bill Clinton to carry the state. It is a must-win for Trump, who must hold on to almost all of the states he won in 2016 if he has a chance of winning. Polling suggests that Trump could gain Nevada from the Democrats, with Clinton winning it in 2016, however, it is looking unlikely that Trump will pick it up and he is extremely unlikely to pick up any others.

This means that the key swing states are:

Biden may not actually need Florida to win the election if he were to pick up Michigan, Pennslyvania and Wisconsin and not lose any states that Clinton won in 2016, however, if Trump does win Florida (which will be one of the first states to declare their result) then it could be a nervy night for the Democrats and an extremely tight race.

What about Texas and Georgia?

Much like Arizona, neither Texas nor Georgia have typically been swing states, voting solidly Republican for decades. The last Democrat to win in Texas was Jimmy Carter in 1976. This is likely to be the case again, Trump will probably retain these states, but polling has suggested that both might be in play.

With a growing Hispanic population, Texas has been trending towards the Democrats for several election cycles, with a Democrat, Beto O’Rourke, coming extremely close to beating Republican Senator Ted Cruz in the last statewide election there in 2018. This has led to suggestions that Texas could become a swing state sooner than anticipated and that Biden might take it. Although this remains unlikely, it is still highly possible and should Texas go blue, there is no chance for Trump. It is worth keeping an eye on.

Georgia is in an almost identical position, except is worth just 16 Electoral College votes to Texas’ 38. Whilst it is worth keeping an eye on, it is also far less important than Texas and probably won’t flip to Biden, but polling has suggested it is possible. 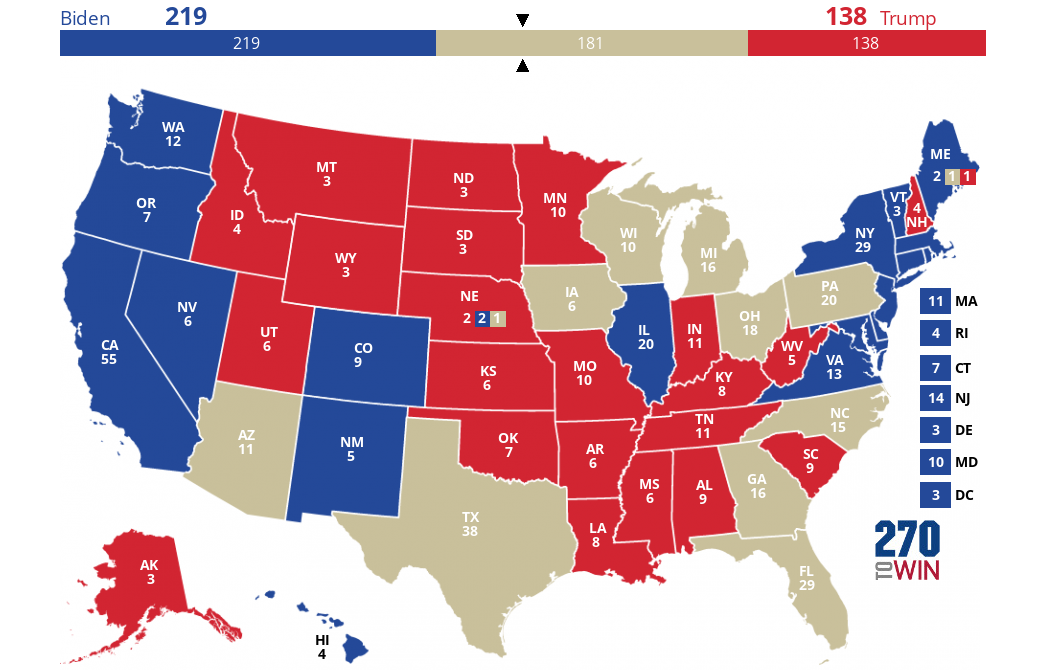 Will turnout be lower because of Coronavirus?

Early voting in this election has smashed all previous records with states like Texas already surpassing the whole vote total they achieved at the last election before election day has even arrived. This will likely result in the highest voter turnout in decades, perhaps in history, although could also result in a quiet day at the polls.

With Coronavirus leaving many fearful, it is likely that fewer voters will turn up on the day than is typical, but a health turnout could still result in the 55.7% turnout seen in 2016 being significantly increased upon.

What will this mean?

High turnout typically favours the Democrats. With Republican voters tending to be more likely to consistently show up on election day, and many states being decided by extremely small margins, the Democrats will need an enthusiastic base to carry Biden to victory.

At the moment this looks likely, with his campaign focusing on bringing likely Democrats out to the polls, if we see turnout significantly above the 55.7% achieved in 2016, we are likely to see a comfortable Biden victory.

One of the major worries for officials and lawyers in the United States is what will happen if Biden wins and Trump does not concede. Conceding defeat is one of the oldest traditions in American politics and leads to the smooth transition of power, with even highly contested elections resulting in the defeated candidate calling the other to admit defeat.

Al Gore did this in 2000, despite heavily disputed ballots in Florida, resulting in a peaceful transition, despite the fact that it is likely that should all the disputed precincts been recounted, Gore would have won.

Trump has repeatedly suggested that he would not concede and that he might challenge the result should he lose; this is even more likely if there are any swing states that are decided by extremely tight margins. Nobody knows what would happen if Trump does not concede, but it seems extremely unlikely that the man who can never admit to wrongdoing would be magnanimous in defeat at the hands of the man he called ‘sleepy Joe’.

When will we know the result?

Typically, we would find out the election result by around about 7 am UK time. This usually comes as the result becomes increasingly clear as states are declared for particular candidates and one concedes defeat. In 2016 and in 2000, Clinton and Gore conceded before all the votes had been counted once it became clear that they no longer had a path to victory.

This could be the same this time, if there is a clear closing of the path should one candidate carry the swing states convincingly, however, with so many ballots cast early the counting of totals may take less time and states may be declared sooner than usual, perhaps in the early hours of the morning. However, the sheer number of early ballots and the fact that these typically are not added into the total until the end of election night, it might be later in the day or even a few days later that the result becomes clear.

Even more crucially, the election could be decided weeks later, in the courts. Trump has already stated that he will launch legal challenges should he not win the election, and with the Supreme Court now 6-3 in his favour, it is quite likely that the result may not emerge for some weeks, and may be wholly separate from the ballots themselves.

This is the biggest worry about the election and could see some states not counting all the ballots cast, with many court cases already declaring that some votes that arrive after election day (but were cast in time) will not be counted in Wisconsin. It will be crucial to see whether a candidate concedes, or whether the result will take some weeks to be declared.

What about the other races?

The Presidential Election may take the headlines, but Americans will also be casting their ballots for the House of Representatives and the Senate, with some predicting that the Senate – currently with a 52-48 Republican split – might flip. The Senate has been held by the Republicans for a decade, with only one-third of Senators up for election at any one time.

This means that there is a higher likelihood of a party benefitting depending on who is up for election each time. The last Senate election was in 2018, which slightly favoured the Republican’s with the Democrats gaining slightly but not making a significant difference in the 2018 midterms. This time, they have a much bigger chance of making gains and could see them taking back the Senate by a slim margin.

In the 2018 midterms, the Democrats couldn’t take the Senate, but they did flip the House of Representatives, who are up for election every two years. This makes it far more likely to flip between elections and on this occasion it is likely to remain Democratic, with some significant gains. Whilst they currently hold the majority, they will likely increase this according to current polling, meaning that even if Trump did win a second term, he would find a solid Congressional opposition that would make it far harder than he found it in his first term.